Sweet tune, Kurt! Love the sax...it's like butta! Can't wait to see you, Ms. Cynthia & your crew when all this covid mess is over! 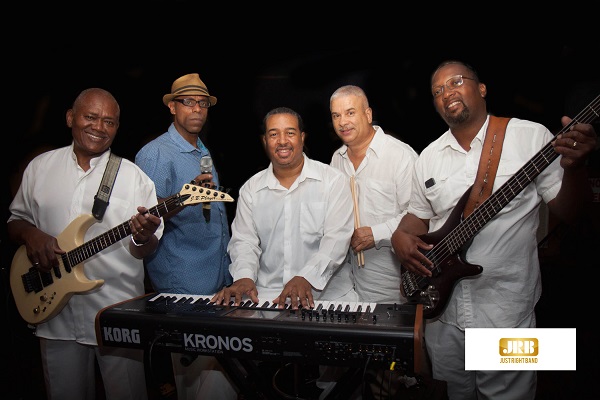 New Orleans. Dance halls and saloons, Sazeracs and jambalaya, good friends and great music. Spiced with soul and a dash of superstition, it’s no wonder the Big Easy has been a go-to spot for musicians and partygoers throughout history. You can’t even think about classic N’ Awlins without a smile on your face. Carefree and full of life – everything feels just right. Which is the essence of the “Just Right Band”, NOLA’s premier quintet that’s preserving yesteryear’s spirit with their blend of R&B, smooth jazz and Southern soul.
“All of us perform with many different types of bands from jazz to rock,” explains drummer/vocalist Brennan Williams. “If you’re a musician in the Big Easy that’s how you survive.” And the members of Just Right Band have been surviving for decades. Louisiana born and raised, all five musicians aren’t merely influenced by the city’s music scene, they live it. Veterans of the community, the group is made up of lead singer Michael Veal aka Ve’ Al, guitarist/vocalist Ronald “Shammika” Ernest, bassist/vocalist John “Petoe” Ragas,vocalist, keyboardist/trumpeter Kurt Brunus and Williams.
Longtime friends, the five wanted to start a project where they simply jammed together. No pressure, just a good time and a throwback to a golden era. Inspired by Brian McKnight, Will Downing, and Luther Vandross, the guy’s have been creating what they call “smile music” since 2013, and to them it’s all about enjoying the collection of talent that makes their sound “just right.” That may be their secret ingredient: doing it for fun; which makes it fun for everyone else.

The group’s debut album “I Want More “is scheduled to be released in March through Swamp Island Records. And so far people seem to agree that Just Right Band is on to something. The title track was #1 on the Independent Music Network for four consecutive weeks; and the New Release “It’s Gotta B Love” has been #1 for the past five weeks. Not to mention a recent feature in Cashbox Magazine. Perhaps that’s why they’ve become a local favorite, a band that’s “just right” for practically every occasion.

Kurt Brunus
Horny & Saxy
(Swamp Island Records)
Despite the sexual innuendos implied by the CD's title, there is a more subtle significance to it. In addition to the piano, Brunus plays the trumpet (horn) and Larry "Skip" Thompson plays the sax (get it?) on this record. Between the two of them-with a little technological assistance from MP3 (or whatever else it is that provides the drum, bass, percussion and occasional string accompaniment)-they have created a fine body of work here. All 11 original tracks-plus variations on two of them-are all in the smooth jazz vein and they're very listenable. Playing piano on all of the cuts, Brunus steps up with the horn on half of the songs, most of which are duets with Thompson. The two of them harmonize beautifully, sharing center stage equally with neither one trying to outshine the other. And when they solo their virtuosity comes to the surface. Most of the cuts are slow, mellow numbers, consistent with the mood the musicians are attempting to set. With short, crisp notes on many of the cuts, interwoven with intricate, extended rhythms, Brunus & Co. have created a pleasant sound.
-Dean M. Shapiro

The most contemporary and festive side of New Orleans is represented this year by keyboardist Kurt Brunus, who has played with The Temptations, Wynton Marsalis and George Benson, among others. With its quartet and special guest appearances from singers Cynthia Bland and Yadonna West, it brings a fusion of rhythm & blues, hip hop, soul and even reggae.